Common Issues with VoIP and How to Solve Them

One way audio occurs when only one party to a conversation hears the other. The phone call is established and has not dropped, just the audio from one party. This can occur with either party unable to hear the other, regardless a few quick checks can point you in the right direction of the cause. First check the phone where the issue is happening. Make sure to eliminate both the phone and its handset and check that they are both working correctly. In some cases a faulty handset can cause these issues.

Network issues that are most likely the cause. These can be:

Choppy calls, broken voice or pieces of words missing all describe the most prevalent type of complaint from customers of hosted VoIP or a cloud based PBX. All are descriptions of what happens when jitter is present and some of the voice RTP data packets arrive out of order or too late and can't be put back into the voice stream correctly. Rather than parts of words being placed back in erroneously or in not in the proper position, they are dropped all together. The result is best described as the phones sound choppy, or choppy voice which is caused by jitter or packet loss. Reasons for jitter are usually insufficient bandwidth or a lack of bandwidth at a particular time. Some applications grab the available bandwidth and "step on" the voice which is then queued for too long.

Jitter is the variation in the time between packets arriving at the endpoint, which is caused by both network congestion or route changes. Jitter buffers are built-in to help compensate for delay or latency, dropped packets and jitter introduced by queuing. Data packets are temporarily stored and then resent in order to minimize jitter and discard packets that arrive too late. Jitter buffers must be correctly configured to be effective. Jitter can occur due to an insufficient amount of bandwidth, (This is actually less prevalent than several years ago as the amount of bandwidth for most connections is vastly larger.), or from a lack of prioritization of voice data packets, which is the first place to examine. VoIP Router Settings

Network issues that are most likely the cause.

NOTE: PbxMechanic.com is a participant in the Amazon Services LLC Associates Program, an affiliate advertising program designed to provide a means for sites to earn advertising fees by advertising and linking to products on Amazon.com. Amazon and the Amazon logo are trademarks of Amazon.com, Inc. or its affiliates.

Below is an example of Buffer Bloat occurring during a speed test. 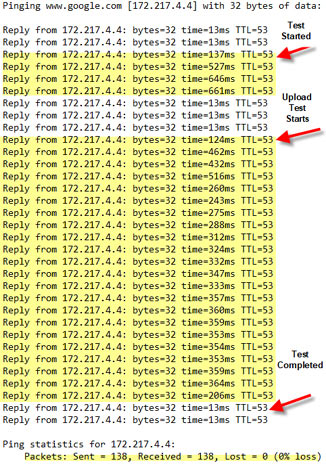 If choppy voice or broken voice is an issue start by making sure that the router being used has the correct QoS (Quality of Service) capabilities. If your router is not capable of handling a small business and has been around for years, you may want to get a better one that will handle VoIP. Setting proper QoS on your router so that voice and/or video phones are of the highest priority is important. Using packet prioritization for RTP (VoIP) and setting a lower bandwidth allocation for certain other applications will help allow (RTP) voice packets to travel through the router before less important types of packets. Setting up VLANs where one specific VLAN is for your phones with computers and other equipment on a separate VLAN. When set up correctly, virtual LANs can improve the overall performance of a busy network.

Echo is when you hear the sound of your own voice repeated after you have already spoken. Echo normally exists in a traditional telephone circuit, but usually won't be noticed due to exceptionally low latency and/or echo cancellation. However, with VoIP and higher latency it becomes much more noticeable. Typically, VoIP connections do at times exceed the time where echo becomes apparent, however echo cancellation is used in a balanced VoIP network reducing the effect. Without echo cancellation most VoIP connections would experience some echo. As latency increases echo will increase. Connections with latency over 150ms echo can become a nuisance, when it gets over 300ms its a bigger problem.

Issues that are most likely the cause.

How to Solve Echo in VoIP.

First eliminate if the echo is actually acoustic feedback caused by voice going out of the speaker and back in the the phone handset mouth piece. Check several phones to make sure that the phone is not the issue. If the phone is the issue, switch out the handset and retest. Check that the phone is using the correct power supply (if not POE). Using the wrong power supply can create all sorts of issues with phones, ATAs and other VoIP hardware. Then check for any faulty line splitters.

Static occurs predominately from electrical interference introduced into the hardware, either the phone, the ATA, or even Ethernet cables.

Some ways that electrical interference can cause static.

How to eliminate noise, static, humming and buzz on VoIP connections.

First start by checking the phone, ATA and their power supply's. If one phone is the issue, or one primary location then your closer to a fix. If all phones get static then make sure any network switch is not introducing the issue. Checking Ethernet cables requires a tester, like a Fluke, but can show important details about any problematic lines.

Dropped Calls- How to Troubleshoot the Cause and Fix the Problem

If you persistently experience dropped calls, then take these steps to identify the issue and correct the causes.

As a business owner looking for cloud-based business communication, the amount of obtainable information can be overwhelming. Repeatedly the most efficient solution is to allow a few minutes to speak with a knowledgeable professional about your companies' requirements. The most suitable solution comes from determining an appropriate plan that offers you the tools and apps to communicate with your customers and to enhance your employees productivity. Obtaining an exact quote is easy. Use the orange "Quote" button next to the provider that most interests you and it will take you directly to their website.

With so many phone system choices information overload is not uncommon. The more convenient alternative is to speak directly with a customer service professional.