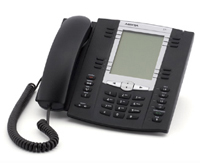 IP phones than conform to open industry standards have been a mainstay with Asterisk IP-PBX installations and Aastra phones were used by many as the go to phone for their deployments early on. These dependable SIP Phones have customizable options that have been used by Asterisk developers to offer the features and softkeys that users typically request. With varying sized LED displays, the i series models have price points that meet many budgets. Below you'll find we offer you many of the 4i and 5i IP telephone manuals for download, as well as the AastraLink Pro 160 Asterisk IP PBX appliance manuals and guides. In January 2014, Aastra officially merged with Mitel, and as part of that merger, some of Aastra’s products were renamed, including their IP phones, and some were replaced or even discontinued. Aastra supplied phones from the very reasonable economy versions to higher end 57i line and all were popular with many Asterisk based installations. They still present an option for those who want a well known reliable open standards SIP phone at a good value, however for those that connect to a hosted VoIP provider you would want to check with the provider first.

The new IP phones can be found under the name Mitel 6730 SIP phone, etc.. Mitel now makes IP phones that are part of the MiVoice line.

The AastraLink PRO 160 Asterisk IP-PBX appliance was discontinued in 2014 by the manufacturer.

Aastra Technologies Ltd., a Canadian company founded in 1983 manufacturers residential and business telephone terminals, screen telephones, business phone systems (PBX), and other communication's equipment. In 2000, Aastra acquired the rights to manufacture phones under the Nortel name. Mitel Networks Corp. acquired Aastra Technologies Ltd. in 2013. In January 2014, Aastra officially completed the merger with Mitel. And as part of the merger, some of Aastra’s products were renamed, some were replaced and some were even discontinued.