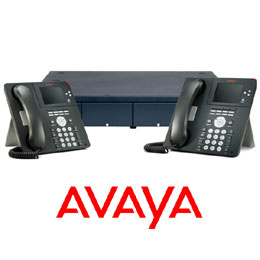 The Avaya IP Office, Avaya’s best selling phone system is a hybrid system which can use digital or analog Avaya phones with it. Because it is a hybrid digital/IP system care needs to be taken when wanting an IP system that it is actually configured with IP licensing and not just a digital phone system with later capabilities to add IP at an additional cost (unless you understand that). Avaya IP Office has been a popular choice for small and medium size businesses although in January 2017 Avaya filed for bankruptcy. In early 2018, the company emerged with a new leadership team and a revised strategy of cloud-first architecture among other new technologies. You can download your Avaya manual in pdf format below. As there are many Avaya phone systems we hope you will be able to do some of the system programming yourself with the help of the proper manual.

If you're thinking about replacing a business phone system, then why not see which one of these systems will suite your needs and keep you in budget. Ten Best on premise PBX Phone Systems

NOTE: PbxMechanic.com is a participant in the Amazon Services LLC Associates Program, an affiliate advertising program designed to provide a means for sites to earn advertising fees by advertising and linking to products on Amazon.com. Amazon and the Amazon logo are trademarks of Amazon.com, Inc. or its affiliates.

Which phone you need for your system: For the very best prices on Avaya phones.

Avaya is a worldwide communications company known for its enterprise communications systems. The company provides Unified Communications, Contact Centers, Data solutions and related services directly and through its channel partners. Starting as At&t the company that would become Avaya was part of Lucent Technologies. In 2000 Lucent decided to spin off a portion of their business that became Avaya, which later bought a large part of failed Nortel. Today Avaya distributes their licensed Avaya phone systems through dealers. In January 2017 Avaya filed for bankruptcy. In early 2018, the company emerged with a new leadership team and a revised strategy of cloud-first architecture among other new technologies. Recently Avaya teamed up with RingCentral to provide cloud based PBX phone systems and other cloud solutions including video.

Avaya IP Office Throughout the Years

In the earliest pre-years starting back in 1994 Network Alchemy was founded. After three years they were acquired by SDX Business Systems who were then almost immediately bought by Lucent Technologies. Avaya actually came into being in 2000 and after two years released the first Avaya IP Office system. In 2003 the IP Office used the Avaya 4602 phone with an IP 412 control unit. The system was upgraded to version R2 that included a larger screen desk phone, the Avaya 4620. The IP Office system was growing quickly in popularity.
In 2004, a R3 version was rolled out and with it came a new line of phones, the Avaya 5402, 5410, 5420 and the 5600 line with the 5601, 5602, 5610 and 5620. The upgraded system also supported the earlier phones. The next several years brought several minor revisions with added features and the integration with Microsoft's CRM software.
In 2006 the IP Office v4 was released with a new KSU, the IP500 and three newly designed desk-sets, the Avaya 9610, the 9620 and the 9630. These models were quickly followed by two handheld models and two more 9600 series desk phones with the rev 4.1 update. 2008 brought revision 4.2, three new desk-set phones, the Avaya 1603,1608 and the 1616 and the highly sought after feature voicemail to email.
2009 started an expansion phase for Avaya when they acquired Nortel and then went on that same year with the IP Office R5 and a year later the R6 that included a doubling of the system capacity and the newer KSU, the IP 500 V2. Then in 2011 came the R7 version of the IP Office and support for many of the Nortel telephones and quickly afterwards the R8 version.

2012 and 2013 was noted for integration with Microsoft Lync and a large increase in capacity with R9 the Server Edition of IP Office.