Nortel/Avaya BCM50: Descriptions of the LEDs and What They Indicate

The BCM50 hardware LEDs offer a lot of information about the system state and can be used to troubleshoot in the case of failures. The indicator LEDs can lead you to understand a system issue in a state that needs attention. A red alarm indicates a critical alarm on the unit and must be cleared using the BCM Element Manager app. The steps to clear the critical alarm are shown below.

Avaya purchased Nortel in 2009 and announced that the Norstar and BCM systems would continue being manufactured, but under the Avaya name.

Another issue that can occur is the unit's LAN connection can be found to be operating at 10 Mbs. If this happens the LED will show yellow as an indicator.

Below are a summary of various Nortel/Avaya BCM50 hardware LED indicator lights and what the different colors indicate. Using them can be very helpful when tackling any issues on the PBX. For more BCM50 Guides. 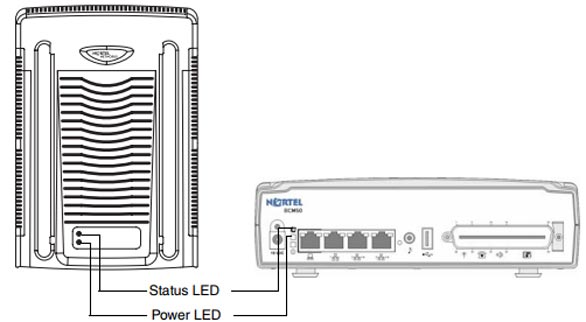 BCM50 KSU LEDs. The KSU has two system status LEDs on the BCM50 which indicate the current state. The top light shows status and the bottom of the two lights indicates power.

How to clear a red LED Status light on a BCM50.

BCM50 Boot Sequence LEDs. These LED descriptions occur after the control unit has started to boot up.

Two solid green lights, one for Power the other for Status show the unit is in normal operation. Additionally when checking for normal operation check the LAN Ethernet port for any yellow LED that indicates that the port is operating at 10 Mbs.

A popular PBX, the Nortel BCM50 (Business Communication Manager) can have a built-in router depending on the hardware configuration.

Avaya then went on to announce that October 2012 they would cease selling the BCM systems, however would continue to offer upgrades and expansions for these systems. As of October 1, 2018 Avaya will no longer offer support for the BCM product line, but there are plenty of these systems in North America and worldwide. Whether they show the Nortel name (older PBX KSUs) or Avaya they are still the same great reliable systems and can be widely found available for purchase.

BCM50- How to Factory Reset